Twitch has a cool feature for streamers, where the longer a viewer watches a stream, the more "Stream Points" they get. This is a great way to get a channel's viewers to interact with the streamer, since that encourages viewers to talk more in the chat.

About every 5 minutes you get 250 points, and the streamer can add rewards costing however much they decide it costs. This could include something like dancing to a silly song for the viewers for maybe 10,000 points, giving the viewer a VIP badge for 20,000 points, or something small like a posture check, so the viewers make sure the streamer isn't slouching too much (full time streamers stream sitting in a chair for hours and hours strait). I'm currently working on adding my own fun channel points, and I'm even taking suggestions from friends and some of my viewers.

As I've mentioned a few times in other posts, I like to livestream on Twitch. I usually just stream videos games (Minecraft mostly), sometimes I stream myself editing, but it's been a while since I've done that. I stream once every 2 days, and I stream on average an hour and a half per stream. Usually after 90 minutes I'm tired of talking, and I don't want to stream if I can't talk. Although I only average around 7 viewers, I still have a decently active chat, where my viewers can talk to me live, and I can respond with my voice. Twitch has a system where when you end a stream, you can "raid" another live streamer, which means you send all of your viewers to his channel while he's live. If I end my stream and raid someone with 7 viewers, and they already have 10 viewers, then they get a total of 17 viewers.
I always make sure to raid someone at the end of a stream, usually smaller than me, so they can break the barrier of the twitch algorithm. I've noticed twitch will push out your channel more once you get past 10 viewers. Unfortunately, those 10 viewers probably didn't find you on their Twitch recommended page, but are probably friends or people you've directly shared your channel to.

I Got New Speakers

YUP, NEW SPEAKERS AND THEY SOUND GREAT!! The brand is Pansonic, and they specify in making speakers. It was $100 off of Amazon (I think I got $20 off because I used Amazon Prime). I even got 1 day shipping for them. It came with all of the cables needed, and it was really easy to setup. They're smaller than the previous speakers I was using, but better than the old speakers I was using before. The brand of the speakers I used first was Bose, which is really good so the speakers held up for 15-20 years, but they were so big and they could barely fit on my new desk. 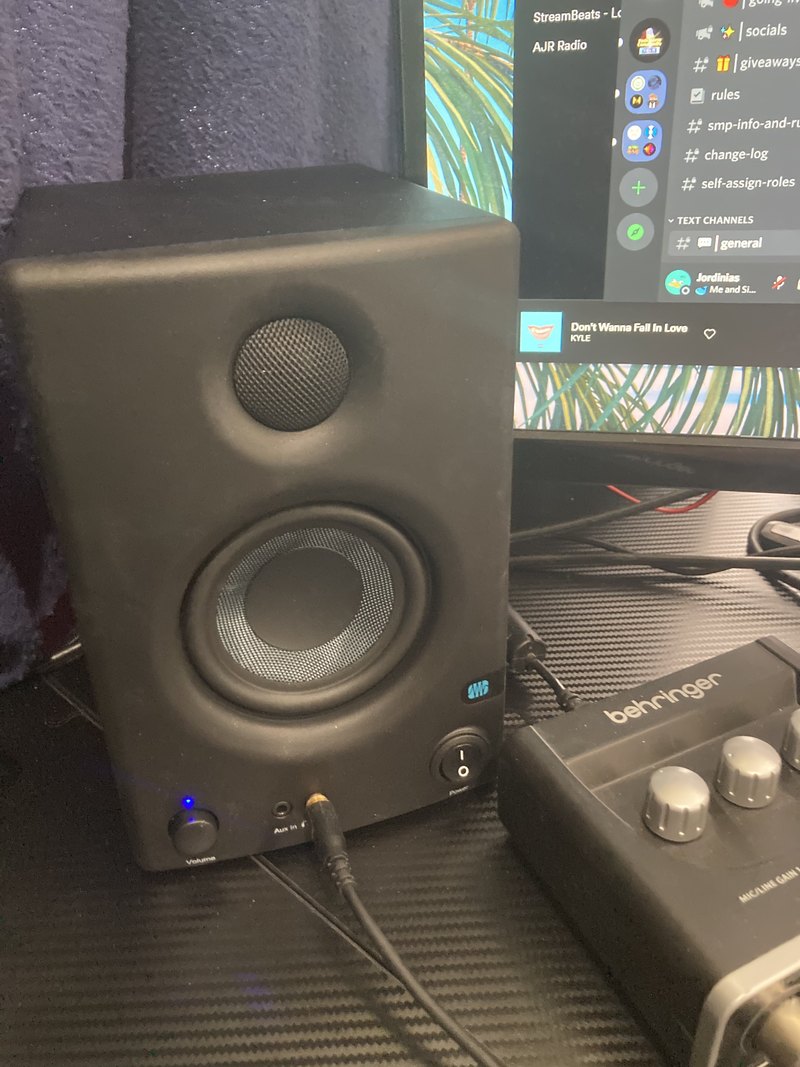 The Desk Came in!

You will remember from my last blog post I talked about getting a new desk, and I bought a model that was the same version as a friend of mine's. It came in Saturday, and I built it the day it came in. It took about an hour to build on my own (it definitely would've been faster with someone else to help, but I was still able to manage). Instead of putting it in the corner, I decided to put it against the wall in the middle of the room, so it would separate the sides of the room: one side is my "studio/office" side with my setup, and the other side has a ton of clothes (the room is a big walk in closet). It took a while to get everything off the first table, then clean off the table then take it down. Next I had to make space in the room, but my computer, monitors, keyboard, and everything that was a part of my setup was all over the ground. Then I built the desk and re-setup my stuff on the desk. I decided to also get new speakers, since the ones I was using were old and really big. I'll be making a blog post on that too soon!

Getting a New Desk

I'M FINALLY GETTING A NEW DESK! If you read my last blog post, I talked about having a tight and messy setup, and that an actual desk instead of a fold up table would be really nice. The desk I got is L shaped, which would work fine for me since I can put my 2 monitors in the corner. It's not as wide as the table I'm using right now, but that doesn't matter.

I got it for $120 off of Amazon, MUCH cheaper than I expected them to cost, AND I got 1 day free shipping. After taxes it was $128.69. I'm excited to use it when it comes tomorrow, and I'm crossing my fingers that it won't come in broken or that it won't be cheap quality. My friend recommended it to me since he has the same one, so since I've seen it in person I'm trusting it.