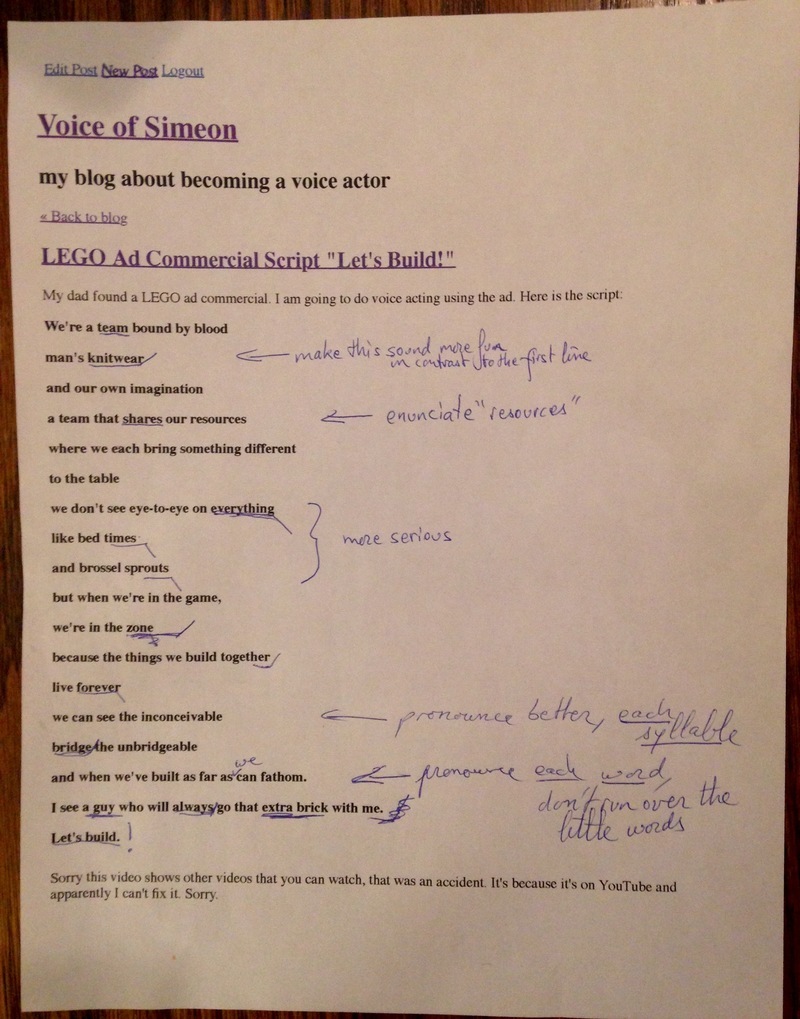 What I Learned Today About Vocal Fry And Personality Acting

Today, on Saturday morning I had a session with Ms. Olsen. I tried doing an old man's voice but it didn't sound good, it's called "vocal fry." Instead she told me to make voice sound more smoother softer.

This time there were only two other people for the session, Aubrey and Lee. I also tried a girl's voice, Ms. Olsen said I should make the girls voice more sassy (I chose the "Salt" story to read, you can see a part of it in one of my posts).

The reason she wanted my voice to sound sassy is because there is a part in the script where a girl named "Vanya" says words in the script "I know something there isn't a story about" and "salt" and "there can't be a story about salt."

She said it is more important that the character's personality comes out in my acting than it was to be able to sound like the girl's or the old man's real voice. I had fun acting as the character Vanya because she's trying to be smart on her grandfather but the grandfather out-smarts Vanya. I really like both characters.

One of the mistakes I noticed was that If you make every word important it's starts to sound weird. What you you should do is underline the important words.

When I read to here the script she said I was reading too fast and I should slow down.

Ms. Olsen also said that when I'm reading and narrating I should make it sound like me, because I was trying to make my voice sound like an adult.

Another mistake l do is sometimes I read so fast that I'm skipping syllables.

I do really well on reading lists and ending in the right tone.

Today l had my first session with Mrs. Olsen and about six people were there [my sessions are only on the internet through Skype]. She listened to me reading a script. She gave me the script. lt was the same one for everybody to read and practice on.

Here is the script:

For you, it might be a sprawling lakefront property with ma- ture trees and a winding driveway through a wrought-iron gate... or, perhaps it’s some- thing more cozy and closer to the shopping mall - we’re not just talking picket fences here!

Come in and chat with one of our mortgage specialists.

Tell us about your dreams.

Williams Mortgage will make them a reality.

The first recording is more happy and young sounding. The second one is more serious and older sounding.
I want to know which one you like best and why.

Second Session for Voice Over Academy with Carrie Olsen

We asked Mrs. Olsen about how to reduce the "s" sounds that hiss. She said it was called "sibilance" and she would find some exercises that could help reduce the hissing sound. Instead of making the "s" sound, you can make more of "z" sound.

She talked about acoustic foam so that sound doesn't bounce off the walls. I tested our walk-in closet by clapping and I noticed that there was a reverberation in the middle of the room. When I tested near the wall where there are clothes, I noticed there wasn't that much reverberation.

Sound deadening is where you don't want sound bouncing off the walls.

Sound proofing is where you don't any background sounds like dogs barking.

Mrs. Olsen recommended you get headphones to hear the recording better so you can hear the popping sounds and be able to delete them.

She recommended exercising and doing push-ups before doing voice acting so you get warmed up and feel ready. I can walk down the street and back to warm up. I could go biking. I could talk like a pirate or like a cowboy doing "yeehaw"

It doesn't matter if you are a kid and you don't like your voice because you sound so young because they are already grown-ups doing kid voices and they are getting paid a lot to sound like a kid.

Mrs. Olsen gets lots of auditions every day. It's where you do a voice and send it to people who want to do ads. The customer asks for an audition and there might be twenty people who say they want to do it and they will send the customer a simple audio file. The customer only wants one person to do voice acting for them. He really wants his ad to go out so that other people will notice it. He can narrow the voice actors down to see who is the best. So when that person gets chosen then he has a job.

Normalizing is when you don't want your recording to be too high or too low. You use software. Our software that can do that is called "Adobe Audition CC 2014". I don't know how to use it yet. I learned today how to press record, stop, pause, and play and delete.

Sometimes a cheaper microphone for some people will make them sound better. So you keep on testing microphones and see which one suits you that you really like and it may be expensive or it may be cheap. You have to test it with your own voice. You can test microphones with http://sweetwater.com/, or go to a local guitar center to test microphones.

Sometimes Mrs. Olsen will record the ads on the radio when she is driving and she will practice copying those.

A thought for today came from my brother Caleb: "You go overboard practicing someone else's voice, but work more on your own voice"

my first lesson was yesterday, and it was GREAT! I got lots of good information for voice acting! There's a website where you can get all the equipment you need, here's the name of it: http://sweetwater.com/ (I have no idea why it's called 'sweet water'). Carrie said that if somebody says "nice voice" when they don't really mean it, don't give up practicing. It was really good lessons! Thankfully my dad was next to me so he could write down the information.
Older Newer